We cannot always build the future for our youth but we can build our youth for the future – Franklin D Roosevelt. The main hope of economic progress lies in the proper edification of its youth, which is the foundation of positive youth reproductive health to ensure a young thriving future. Regardless of how the Nigerian economy is, its success dwells on advancements of youth to the next generation. Nearly one-third of Nigeria’s total population of 148 million is between the ages of 10 and 24. One to two Nigerian adolescents’ sizeable share of the population makes them integral to the country’s social-political and economic development. Lack of sexual health information and services makes young people vulnerable to sexually transmitted infections (STIs) and unintended pregnancies. However many organizations are working to improve adolescent reproductive and sexual health through advocacies and prevention programming.

In a study of the perceptions of risk among college students in Osun State, Nigeria, 40% of the respondents reported engaging in unprotected sex in the month before being surveyed. Only 15% of college students surveyed perceived themselves to be at moderate-to-high risk of HIV infection. Health investigators categorized 77% of students surveyed as having a high risk of HIV infection and a mere 23% as having a low risk of contracting the virus. In a country where the rate of married teens and young women using contraception is much fewer, and the high-risk rate of HIV infection, youth reproductive health cannot go without comprehensive awareness to the underestimate risks of unprotected sex.

One of the major problems preventing progression for youth and reproductive health in Nigeria is unemployment. For boys in many Nigerian societies; the definition of manhood is closely tied to employment. Where poverty and unemployment are high, lack of earning opportunities has a profound negative effect on men’s sense of self. Young men who are unemployed and underemployed feel a loss of identity and are at an increased risk of perpetrating intimate partner violence, abusing alcohol, and other risky behaviors, while girls’ limited access to earning opportunities further exacerbates their dependence on men for economic support, increasing their vulnerability to child marriage, early sexual initiation, cross-generational and transactional sex, unsafe working conditions, and other forms of exploitation. Many young people have limited or no opportunity to participate in their communities or the political process. This is especially true for young women because family responsibilities and lower access to education and other resources limit their ability to contribute to or benefit from the social and political structures they live within.

Gender inequality is a growing disadvantage to youth and reproductive health during adolescence because this is a time when many young women become marginalized in their communities. They may be forced to drop out of school, expected to do more work in the home, or forced into marriage. They often experience less freedom of movement and are socially isolated. They are more vulnerable to gender-based violence, unprotected sex, and often forced, coerced into unplanned pregnancies and infections (STI and HIV). However, rigid and unequal gender norms also hurt young men. Young men who are most vulnerable include: men who identify as gay, bisexual, transgender, unemployed, those who are out of school or engage in child labor, and those who have been victims of violence as children.

For the sake of positive advancement of youth reproductive health, the following solutions should be considered important next steps for Nigeria; Knowledge of contraceptives and self-efficacy are very important to raise Positive beliefs about the ability to use contraception (including condoms) and greater knowledge about contraceptives and how to use them are associated with an increased likelihood of use. Emergency contraception (EC) prevents pregnancy after unprotected intercourse. Increasing young women’s access and awareness of EC is an important way to prevent unwanted, mistimed, or high-risk pregnancies and unsafe abortion. Another important step in the promotion of positive parental lifestyle to aid a protective factor related to sexual debut, adolescent pregnancy, condom use, and HIV prevention. However, complete sexual abstinence is the most effective means of protecting youths against both pregnancy and STIs, including HIV infection. For adolescents to be successful in practicing abstinence, strong social support from partners and community members, a high degree of motivation and self-control, and good communication skills are all required. Abstinence is an option for all young people, even those who have already begun sexual activity. Abstinence is a skill. Young people need to learn how to communicate, negotiate, and make good decisions. This must include practicing how to refuse sex and negotiate condom use.

Youth decisions and behaviors will continue to affect Nigeria’s social, environmental, and economic well-being for generations. If young people are provided with the appropriate skills and opportunities, they can be catalysts for positive, sustainable change. As the number of young people increases, young people urgently need access to quality education, vocation and life skills, and a range of health services. Cultural and social norms need to change so that youth with support from adults and decision-makers can establish healthy behaviors while young, creating a solid foundation for a healthy and productive future. 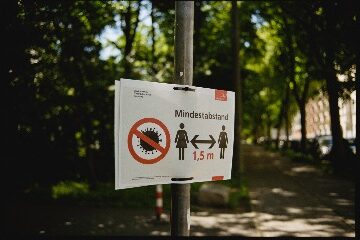 One new term that has generally been used during the COVID-19 pandemic is social distancing. Everyone is expected to stay...

Workout At Home: Body Weight, No Noise – All genders

Hey fellows! I know we are all stuck at home doing a great job keeping physical distancing and flattening the...