Hail to the IBM

Every Week, on Monday, the first refreshing thing you see when you step into the IBM CHQ is the new flowers arrangement. I made a collection of the photos of my favorites ones of last year.

What is special about this video is the background music I chose; It is IBM Anthem!

The IBM Anthem was the result of a famous opera star’s interest in the aims and ideals of IBM. Dusolina Giannini, dramatic soprano of the Metropolitan Opera Association, was vacationing in Europe in 1938 when IBM’s president, Thomas J. Watson, Sr., was on a business visit to the continent. At his invitation, Miss Giannini attended a dinner at Bad Gastein, Austria, given in honor of IBM representatives from 25 European countries and their spouses. Miss Giannini, who entertained the gathering with selections from her most famous roles, was so impressed with the IBM spirit, that she called Tom Watson the following day to propose that she ask her brother, Vittorio Giannini — a composer of considerable renown — to write an IBM anthem. She further expressed the certainty that Fred W. Tappe, the lyricist (and IBMer), would enjoy writing the words to the anthem. Watson agreed — and “Hail To The IBM” was the creation of the collaboration. The composition premiered in New York City at the banquet of the 1938 Hundred Percent Club, May 4, 1939, and was sung by the entire assembly.

Lift up our proud and loyal voices,
Sing out in accents strong and true,
With hearts and hands to you devoted,
And inspiration ever new;
Your ties of friendship cannot sever,
Your glory time will never stem,
We will toast a name that lives forever,
Hail to the I.B.M.

Our voices swell in admiration;
Of T. J. Watson proudly sing;
He’ll ever be our inspiration,
To him our voices loudly ring;
The I.B.M. will sing the praises,
Of him who brought us world acclaim,
As the volume of our chorus raises,
Hail to his honored name. 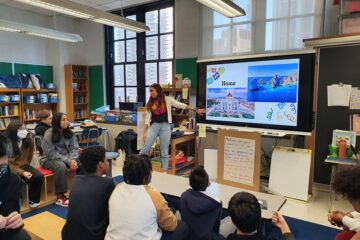 Immersing myself in NYC classrooms!

When I first entered a school in New York City (NYC) – a public middle school in the Bronx -,...