The NEXUS of Humanitarian Aid

Last February 1, 2018, I had the opportunity to join a panel of formidable Humanitarian Aid workers during the 2018 NEXUS USA Summit. The session entitled “Giving More Directly After Disasters” talks about how we frequently hear about big disaster i.e, Katrina, Haiti, Sandy, Nepal, Maria, relief efforts that don’t work and the generosity of donors not fully realized by survivors.  I joined Marcie Roth from Inclusive Emergency Management Strategies, Aryah Somers Landsberger from the Grantmakers Concerned with Immigrants and Refugees, Emily Troutman, Journalist from Aid.Workers, and Ben Smilowitz from SmartResponse.org and Disaster Accountability Project, in answering the questions: 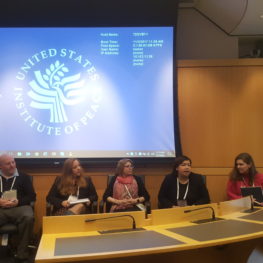 The panel requested me to deliver the opening statement and below is an excerpt of what I shared during the session:

The context of the Disaster Response

The Philippines is a country of 7,107 islands. It is located in south-east Asia, just above the equator. It rests in the pacific’s earthquake and volcano ring of fire. It is also a gateway to typhoons (or what is called hurricanes here in the US). It has the warmest ocean temperature in the world and for typhoons to form it needs above 28 degrees Celsius at 82 degrees Fahrenheit. The Philipines in the year 2013 was a year that the country had to deal with the biggest and deadliest natural disasters. It also proved to be a pivotal year for many of the local civil society organizations in the Philippines, including my organization called the Philippine Center for Civic Education and Democracy.

The Philippine Center for Civic Education and Democracy is a non-profit organization dedicated to strengthening civic education as a means to a more meaningful participation in the democratic life. PCCED believes that our common vision as a people is to make democracy work out of love of country. That vision guides us in our work with teachers, youth leaders, local authorities, and the civil society groups.

The story to put in perspective on how an organization working on promoting civic participation got involved in humanitarian work began when I was managing a project that promotes civic participation in the various decision-making processes of the local governments and sectors in the Philippines. From our Manila HQ, I received a message from our staff that a 7.2 magnitude earthquake has occurred in the Province of Bohol (our project area). To make sense of the magnitude it is as strong as 32 times atomic bomb dropped in Hiroshima, and it generated more than 4,000 aftershocks with 200 deaths, 797 injured and displaced tens of thousands of residents.

3 weeks after, the strongest and deadliest Super Typhoon Haiyan, took place in the neighboring Province, Leyte. Super Typhoon occurred with storm surges reaching 23 ft and as high as 16 ft. It affected 12. 9 million people or 13 % of the Philippines’ total population. It claimed 4,460 lives and left 1.9 million people homeless. Instinctively, as a development worker, and just like the many other Filipinos, I’ve reached out to our existing partners and donors to inform them about the situation and appealed for help.

We’ve got noticed and we were heard – thanks to the media coverage the Philippines was instantly in every news headline -tv, print, and social media. We’ve received a small funding (close to 1 million dollars) relative to the  International humanitarian organizations, but big for a small non-profit organization from private individuals, business groups and corporation, foreign governments, religious groups with a wide array of interests and priorities.

3 Key Points that I highlighted in my talk

1. What did the donors want?

What were the targets?

2. What my organization (like the rest of the world) initially thought about taking responsibility for the donation?

I can vividly remember how as a senior manager of the organization at that time, I was called by the board to explain to them the merits of accepting the fund. Mixed feelings were expressed over the matter. I gained little support from my colleagues in the senior management team. The apprehension expressed were based on our organization’s reality:

Like what the rest of the world thinks, humanitarian work is a very big sphere for a small organization like ours to squeeze in.

3. How can a daunting task be transformed into action?

As we try to strike a balance between aspiration and reality, my team and I responded to demands and limitations:

The results of our work

We’ve run 3 more cycles of humanitarian work, and recently before I left the organization to do my Atlas Corps fellowship at Heartland Alliance International in Chicago, I’ve worked on developing new programs and securing funding for projects that integrate civic participation in disaster risk reduction and management.

This gives a chance to men, women, youth, elderly, leaders, persons with disabilities, and every member of the community to take part in mitigating risks and impacts of natural hazards.

I’ve also actively lead a consortium alongside directors and leaders of 3 other civil society organizations that focus on initiatives aimed at strengthening the capacity of local organizations.