Central America is a wonderful place, despite its reputation as a one of the most dangerous areas on the planet. Especially Guatemala, Honduras and El Salvador who are the countries with more social issues in the region, beautiful countries with an abundance of natural resources and a warm, welcoming culture. But the reality is that It’s a very hard place to live. With political corruption, repression, gangs, drug cartels, land pressures and climate change, life could be very difficult for most of the people and impossible for some. It’s natural that many of the people of those countries (especially the poorest people) seek in migration the only solution to improve their lives. 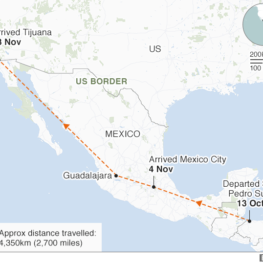 At the end of 2018, thousands of migrants have arrived at the US-Mexico border after travelling more than 4,000km (2,500 miles) from Central America. They say they are fleeing persecution, poverty and violence in their home countries. Many of them say their goal is to settle in the US despite warnings by US officials that anyone found entering the country illegally will face arrest, prosecution and deportation.

In the United States, Central Americans represent 8% of the 43.3 million immigrants in the country. 85% of Central Americans in the United States are from the Northern Triangle, formed by El Salvador, Guatemala and Honduras. The migration to the country of the bars and stars is not new and has been developing since many years, for no one is a secret that this migration in addition to favoring the families of Central Americans also greatly favored the economic of United States, becoming a fundamental workforce for basic tasks in that country. only few people see that behind this migration there are many sacrifices for people who decide to do it, from leaving families and friends back home to marathon work days, all those sacrifices are worth it to get their families ahead.

Participating in a fellowship in the United States I often speak with different people on this subject, with the aim of knowing the different points of view on this problem, until now (I don’t know if by a wrong persecution that they can offend me) most of comments are in favor of migrants, only one person so far has told me something that I know is the way of thinking of many Americans, this person told me that his hometown was almost 100% formed by Americans, who share the same color skin, taste for the same food, music, sport and traditions but now the Latino population has grown by almost 30% and although he didn’t continue developing his thought I understood the point, he feel fear that this number increases in an uncontrolled way, an unfounded fear? No, no at all, I think it’s fair that he thinks that.

In my point of view migration is a problem that has a limit of collapse, that means that if the number of migrants continues to increase there will be a widespread discontent, I don’t believe that this limit is close but if the constant of migrations continues some day this limit will be reached and if we add to that increase that there are leaders encouraging rejection and hatred towards these migrants it seems inevitable a lack of control in this problematic, without a doubt we must look for a solution, but the solution is not to create walls or divisions, the solution happens more to look into the origins of the problem, the root, is where the true solution is.