On behalf of the Atlas Corps Board of Directors I hope this message finds you healthy and safe and excited for the potential that 2021 holds. It is with pride, excitement, and anticipation that I announce Scott Beale, our visionary founder and CEO, will soon step down from the role of CEO to serve in a top leadership role at the Peace Corps as the Associate Director of Global Operations. Scott will be joining the Administration to help the Peace Corps build back better after 60 years of operations. We are proud of, and excited for, you, Scott!

Our Board will engage an executive search firm in the coming weeks to launch a national search for our next CEO.

We are also thrilled to announce that Atlas Corps will be led by one of our Alumni – Abby Robinson (USA, Class 2, Host: Fundacion Saldarriaga Concha). Abby will assume the role as Acting CEO.  Abby was one of our first Fellows to serve in Colombia and has been part of our Atlas Corps Team for the past 10 years as the Chief Development & Engagement Officer. She will help guide our capable and experienced team as we identify the next CEO to lead Atlas Corps into the next phase of the organization’s growth.

For the past 15 years, Scott has led Atlas Corps with vision and focus to create the first ever sustainable volunteer program to connect and empower global leaders through service in the United States. For the past 15 years, based on the idea that “talent exists universally in the world but opportunity does not,” Scott built a global community of more than 1,000 leaders from 103 countries. Scott was twice named one of the top nonprofit CEO’s in the U.S. by the Nonprofit Times. President Obama recognized him at the Clinton Global Initiative as part of his administration’s Stand With Civil Society Initiative. It is fitting that after establishing the “reverse Peace Corps,” Scott has been called on to help support the mission of the original Peace Corps. We thank Scott for his years of service to establish the thriving international community at the heart of Atlas Corps.

We also want to thank YOU, the Atlas Corps Community. Everything that has been achieved at Atlas Corps, from winning online fundraising contests 15 years ago to overcoming the financial hardships of the pandemic, has been accomplished by the collective efforts of this Community. People are at the heart of our mission and we know this will remain true into the future.

P. S. We also hope that you join us on Saturday, November 20, 2021 for our 15th Anniversary Gala. Please read on for an important note from Scott on this transition.

A MESSAGE FROM SCOTT BEALE, FOUNDER & CEO
With gratitude as a new chapter unfolds

Thank you, Whitney and the Board, for this vote of support and inspiration. Also, Thank YOU to this entire community – YOU all are Atlas Corps! 15 years ago, this idea came to fruition because of other people who believed in the idea and in me.

As for my next step, I am honored to join the Biden Administration to serve as the Associate Director for Global Operations at the Peace Corps. The Peace Corps is celebrating its 60th year of operations and yet the 7,000+ volunteers who serve in more than 60 countries have all been brought home due to COVID. It is a huge opportunity to help build the Peace Corps back up, particularly in a way that takes into consideration racial justice & equity, that is humble, and re-engages with the rest of the world addressing critical issues including global health, climate change, education and more. There are so many challenges our country and the world are facing right now and the Peace Corps will play a role in solving them. There are very few jobs that I thought I’d ever leave Atlas Corps for, but I’m excited to serve my country and take on this challenge.

As for Atlas Corps, we start 2021 eager to mark an incredible milestone year. We are celebrating 15 years of impact and we are crossing the threshold of 1,000 leaders from 103 countries who are part of the Atlas Corps Fellows and Scholars Community. We are proud of the collective impact of this Community, and humbled by the individual achievement of our Alumni who have returned home to launch nonprofits, to run for office, to take leadership roles in established organizations, and to increase their impact back home.

We are kicking off our anniversary year in a stronger position than we have ever been in our history. We’ve successfully pivoted our programs online by launching blended classes that are part overseas and part in the U.S. and by starting multiple Virtual Leadership Institute Cohorts. I am so proud of what we have accomplished over the past year and in the journey of creating Atlas Corps, in building this organization, in overcoming hardships together, and in establishing a sustainable nonprofit that not only develops leaders, but also strengthens the organizations where they serve and the communities to which they return. I am so thankful for what we have accomplished during the first 15 years of Atlas Corps and excited to stay closely involved in the ongoing activities of Atlas Corps.

What made this success possible was our extraordinary community – staff, Board, Fellows, funders, volunteers and more – who share a passion for addressing social issues by engaging diverse leaders from around the world. Atlas Corps succeeded because of the countless times that people offered help, chipped in, and made the dream of Atlas Corps a collective goal, rather than an individual dream. I’m particularly thankful for my wife, Courtney, who has always been so critical to the success of Atlas Corps (and my success).

I’ll be stepping down as CEO from Atlas Corps. I will also continue to support the organization in every way possible.  I will always be the number one advocate for the organization, the staff, the Leaders, the entire community.  I feel very confident about Abby Robinson’s leadership as the Acting CEO and the Board’s commitment to help support this transition. Abby has been by my side since almost the very beginning, serving in the first class of Atlas Corps Fellows in Colombia and then being a part of the organization’s leadership for more than 10 years. Atlas Corps is entering this transition in a period of strength and opportunity and I’m excited to see how the organization will grow and deepen its impact in the coming years. The work of Atlas Corps is more important now than ever before.

I will have more to share in the coming months. For now, I want to say Thank You! Thank you for making this dream a reality. I am forever grateful for your support.

P. S. Stay in touch! I can be found on LinkedIn, Facebook and my personal email: scott@scottbeale.com. 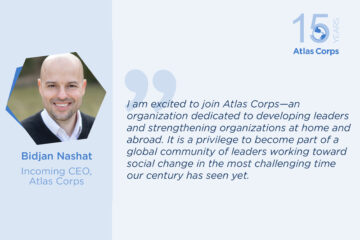 A MESSAGE FROM THE ATLAS CORPS BOARD OF DIRECTORS Dear Atlas Corps Community,  On behalf of the Atlas Corps Board...

Atlas Corps is pleased to announce new additions to our Board of Directors and to bid a fond farewell to...

When I first arrived in Washington, D.C. for my Atlas Corps Fellowship a year ago, I was looking forward to...