It’s #SmallBusinessWeek in DC. Small Business Administration (SBA) kicked-off this week with a hackathon in collaboration with VISA for developers from around the country to come together and make products that can help small businesses in America. As a startup, we like going to competitions to network, to see and share ideas and find collaborations. As our mission is partnering with visionary companies on problems that can’t be solved the usual way so this is what hackathons are for. So our Founder went to #SmallBusinessWeek hackathon and this is the story he shared with how it all went.

I went there without any idea in mind. As being new to DC I didn’t knew much about the market and specially the problems which small businesses face in US. As this was my first hackathon in US so I also had no idea how it’s going to go but it was preety similar to what we have in Pakistan. People who had ideas started going on the stage and pitching their ideas. Some ideas to be honest were so high tech that I was unable to understand and most of them were related to something playing with data.

On my left there was this guy from Virginia whom I met while waiting in the line as the check-ins were on going. On my right side there was a guy with two big bagpacks he was coming to hackathon straight from Holland (Ivo). We were commenting on every person’s idea after they are done pitching and as I was listening to these ideas it occured to me that I have an idea which I was working on and it can help small busineses grow. So I opened up my laptop and pitched this idea to both guys sitting next to me and that pitch was the worst ever because right after I finished they asked a couple of questions and then they said “Okay great! Let’s circle around the room and see if we can find a team to team up with” I thought may be the idea is not worth it for small businesses.

The guy from virginia went another way and the guy from holland (Ivo) sticked and we went to another guy (Alex) who picthed the simplest idea which was somehting like making an upwork platform for small businesses. At that point I couldn’t decide where to go as all ideas were beyond my understanding. So that upwork for small businesses idea guy already had one person in his team and he was happy to welcome us in his team.

I was happy that I am a part of team and I was committed that no matter what I will make sure that I give my best. So our team of 4 young people went upstairs and Alex explained the idea to us which at that moment I was unable to connect all the dots but I kept telling myself that I don’t know much about the small business market so may be he knows what he is doing though I asked a lot of questions but still I was unable to figure out some points but I was convinced that when tomorrow we will start working on this idea I’ll understand it and everythign will be fine. (Tip: Don’t do this).

Then Ivo the guy from Holland asked the question which changed our fate and I would say because of this question we got the runner-up place in this hackathon. He asked me “Do you have a couch where I can crash on for the night?”Coming from Pakistan we are culturally promrammed to be welcoming so it been just 2-3 hours since I know this person and I said hey! sure why not.

On our way back to my place I tried telling him the idea again with different examples. I didn’t said let’s do this we were just having a general discussion and within this I pitched him the idea again. We came back home slept for the night and in morning I went down dtairs and saw Ivo doing something on his phone and he looked at me and said “Dude I think your idea is better and I thought about it and I say we do your idea.” I was not expecting this but I was happy because I was unable to understand Alex’s idea and I was unsure what I’ll be doing today. So we agreed that we will talk to Alex and Buffaloboy (The 4th team member) pitch them this idea and if they agree then we will work otherwise we are going to divide in 2 person team and start working on my idea.

It literally took us 5-10 minutes and Alex and Buffaloboy were on board with this idea so the four of us started working on it. THat full day on saturday I was in the ZONE, which means I had my hoody cap on with loud music in ears and coding. It felt great as I was programming after sometime. Alex and Ivo worked on the presentation and pitched and Buffaloboy worked with me as an engineer to get the prototype ready. By the end of saturday we had a prototype ready and a good pitch.

Sunday morning at 10AM was the time to code freeze. We already had a prototype so we took this time to test it. Everything was ready and then the revealed the list of ideas and the order of their turn to pitch. Every team was to get 3 minutes to pitch and then 2 minutes for Q/A. We were third on the list and so it started. People pitching the ideas some prototypes failed during the presentation some run out of time. Our presentation was good we might took some seconds over three minutes though but overall it was 9/10 if you score on a performance.

After we were done with our presentation all left for us was to see all the pitches and compare do we have a chance or not. Most of the ideas revolved around data science and graphs and some had hardware like Google Alexa. Our idea was a simple mobile app that turn your customers into brand ambassadors and this increase customers for small business but in an innovative way.

So finally it was time for results. By that time listening to all the great ideas I was 50/50 on us winning something. Again the fear of not being in the market not having enough information about the market was hitting me because our technology was very simple.

So it happened we got the runnerup position and won $5000. That moment was one huge for me because it was unexpected. But I’m ahppy I get to work with great team and get to listen to great idea and met a lot of great people.

Here is a photo of our team receiving the prize. 😉 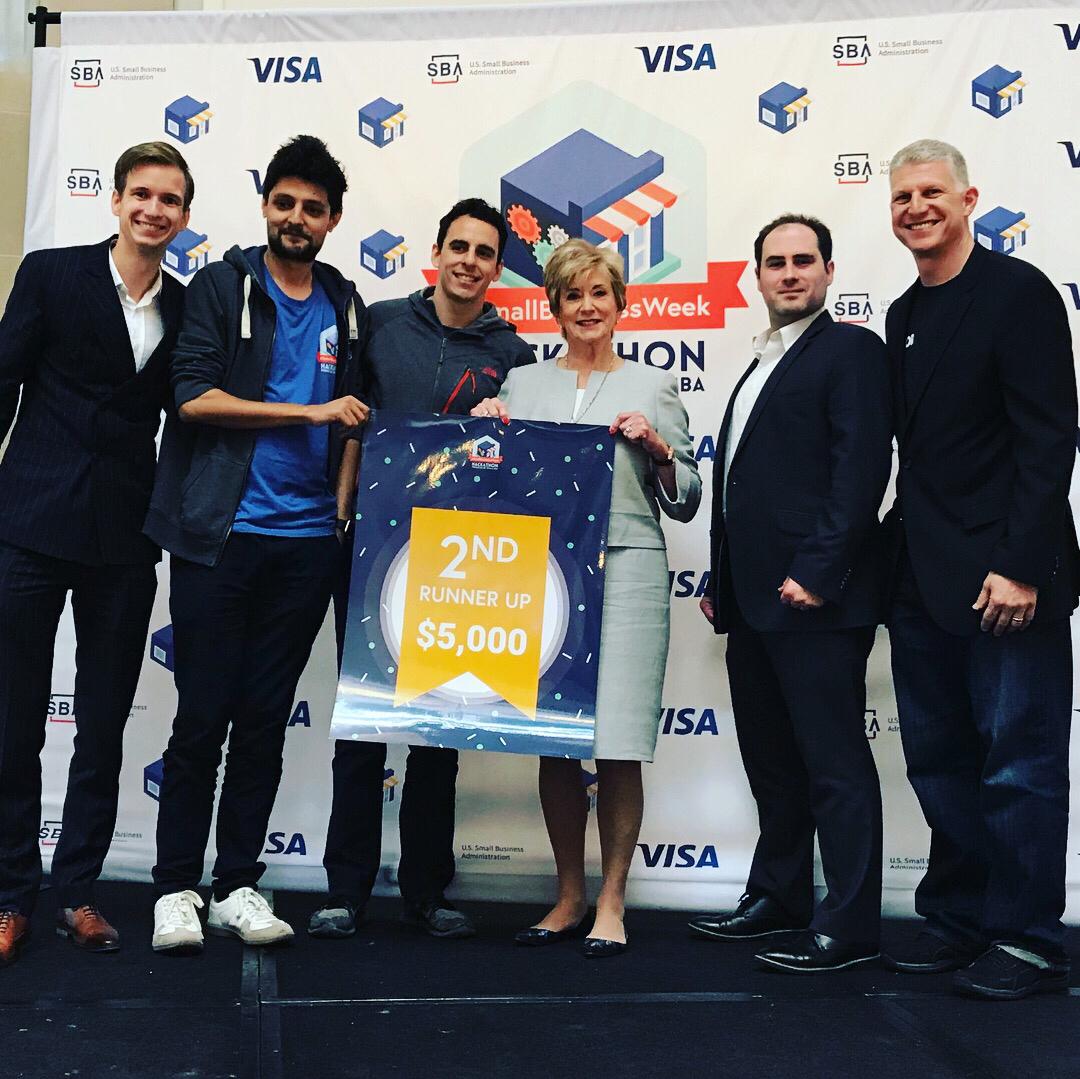