Have you ever wondered what it takes to rewrite history? Given a chance to rewrite history are there parts of it you wish they never existed and wished they could disappear without a trace. In the same history, there are parts that when we read we beam with pride and wished they could overshadow the not so good parts of it. The world has made us hate our history, most of our history more often than not history evokes anger. 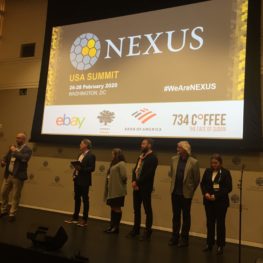 However how long are we going to stay angry? It is time for us to change the narrative such that we can stand in pride and retell it in any forum. There are so many people with the passion of changing the present such that in the future our history is not so embarrassing. Attending the Nexus Summit US not only did it revive the hope, but it also showed how much everyone is eager to rewrite history, in all spheres of life. These ranged from equal justice, overcoming the societal stereotypes, taking good care of our earth, normalizing mental health, showing up for people in need. 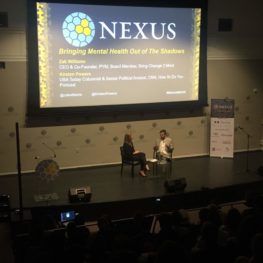 The major call for the summit was changing the narrative and the stereotypes that we have become accustomed to, for example, calling a person without a home “the homeless” instead of addressing them as a person, the media stereotypes that have been perpetuated for years such as portraying people of color as “criminals”. There is a need to change the narrative for the people with disabilities from viewing them as human rights and people in need of our sympathy to value-based and authentic inclusion with something to offer.

Many speakers took to the stage over the 3-day summit many advocating for their various passions, these included, Jason Carter grandson to the former US President Jimmy Carter who encouraged attendants to be systematic changemakers and appreciate the work being done at grassroots levels. Their passion at Carter Centre is the alleviation of human suffering, through seeking ways to prevent and resolve conflicts, enhance freedom and democracy, and improve health. In his speech, he highlighted that many at times credit goes to wrong people instead of the actual people who would have designed solutions to societal problems. He spoke about his heroes and heroines who don’t happen to be his grandparents but “Gogo” from South Africa, the young man from Sudan. These are people who have come up with solutions to their societal problems including the elimination of the guinea worm in most parts of the west and east Africa. In his speech, he spoke about how many at times when a solution of a problem has been found credit goes to the wrong people instead of those local people like Gogo and people who work tirelessly with their communities to solve these challenges. In his talk, the most important point he stressed and many other speakers too in this Nexus is all about changing the societal narrative. It is up to us and this generation to rewrite history such that when they read our stories we beam with pride instead of hiding in shame regretting all our choices. It is up to us to stand against the accepted stereotypes and ensure they are eliminated in the modern-day world. 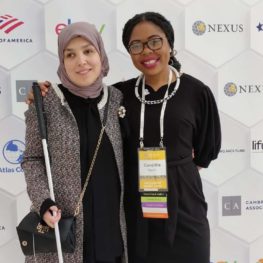 Sara Minkara the founder and CEO of Empowerment Through Integration (ETI), a nonprofit committed to developing a more inclusive society through empowering youth with disabilities and transforming social and cultural stigmas against disability globally challenged the audience to change their perspective about people living with disabilities. Sara is a Lebanese-American Muslim woman who lost her sight at age seven she has become advocate for youth with disabilities she wants to ensure that they have enough become catalysts for change in their own lives, their communities, and beyond. Through her organization, they want to change the narrative and challenge the long perpetuated stereotypes about people with disabilities. Her inspirational story told with passion showed how she has outlived what the world considered a disability and is advocating on a day to day basis for the narrative to change such that people living with disabilities are also viewed as people who can bring value in their communities, their country and to the world.

In advocating for change one pertinent issue in the summit was taking good care of our environment. Climate change has left the world in a race against time to preserve the little that is left. The Nexus family also incorporates climate activists who want to ensure that future generations have something to come to. 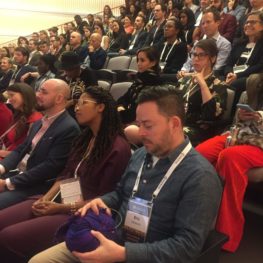 The Nexus Family was encouraging everyone to continue to prioritize philanthropy as they rewrite history and have a true representation of the world. The various calls from the summit included making sure various passions are accelerated ensuring that they serve the correct purpose. The passions included gender parity, for example, increasing the number of women directing commercial films from the current 10%. Amongst other passions was advocating for equal justice and an urgent call for transforming the criminal justice system. The summit attendants were startled at the discovery of the prison systems which are not only unjust but not safe for human habitation. As the Nexus family continues to advocate for true representation in the world, one of the most topical issues was destigmatizing mental health which stood at the core of healing the US as a country. There is a need to erase hate and start building bridges and form relationships regardless of race or ethnicity as we work towards writing a new narrative for the country that everyone we are able to read in the future and be proud. 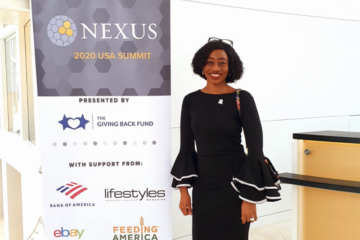 Nexus Summit afforded the opportunity of listening to and meeting individuals involved in promoting social good. NExus is a community... 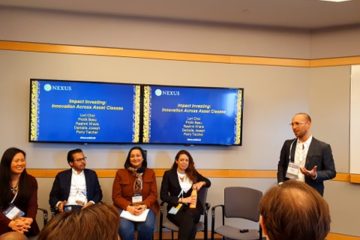 NEXUS USA Summit was held on February 26-28, 2020 at the United States Institute of Peace in Washington, DC. The... 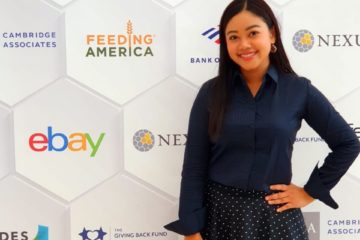 “I like to think that human beings are tiny dots. For us to make a significant change in this world,...