On being away, but ultimately present

Coming to Washington, DC at this time served as a step forward in my career path by providing me with a much-needed learning opportunity and a challenge. An increasingly restrictive environment back home combined with a personal conviction of the need to be proactive but in a different context with a different set of conditions and challenges meant that I had to be somewhere else; in another country.

Starting off my fellowship with the Tahrir Institute for Middle East Policy, I had so many aspirations and fears as to what the near future holds. A few weeks into the start of my fellowship though, a series of unfortunate events began unfolding in Egypt. A sweeping wave of arrests unleashed more anxiety and stress than was already there, and this sentiment peaked with the ambush of the office of Mada Masr, an independent Egyptian news platform, by security authorities and the arrest of three staff members. Mada is not only that, but my own former workplace, and a place I immensely respect and hold dear to my heart for its incredibly passionate members, and daring written output at a time when very few dare to speak.

Caught between the two

For a few days, I was glued to my phone screen, trying to get real-time updates about every single detail of this critical event; starting with the office raid, arrests of fellow colleagues and then their abrupt and unexpected release a few hours later. I was not really “here” in the sense that I withdrew into my own shell for a bit and wandered around just to get clarity about so much that has been happening lately.

Seeing as my host organization is already heavily engaged with such matters, we were in constant contact to share news and reassurances over the phone as we were not even at the office during the time it all happened. I was extremely thankful to be part of an organization that is not only dedicated to its mission to advance democracy and the rule of law in the Middle East and North Africa, but also cares deeply about the wellbeing of its staff.

After a few days of endless scrolling, reflection and gathering one’s thoughts, a new work week started with a newly found purpose and a busy agenda. We would be part of a wider coalition of local and international organizations and voices that are calling for a free press and an end to the intimidation in what is essentially a wider crackdown on journalists and civil society at large in Egypt.

This ordeal was a harsh, yet urgent reminder of the reason I wanted to come to the US and be part of the DC think tank community in the first place. It is true that sometimes the social issues that we are passionate about and working towards can be stressful and draining. But that is only temporarily. This is always followed by another episode of struggle, reconfiguration and perseverance as exemplified by the Mada team itself. I will leave you with a quote by Mada’s formidable Editor in Chief Lina Attalah where she eloquently described her team’s dedication and passion for the written word.

I leave you to more publishing, for as long as we can, with a gang of prisoners of love — who by now know best how to laugh in times of crisis. 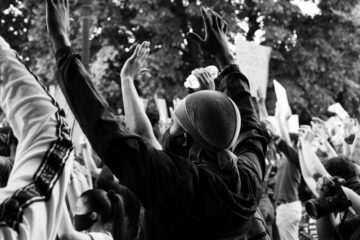 Fellowship during a pandemic: the experience of a journalist

One year ago when I just came to the US for a one-year fellowship I had a lot of plans:...