There are several descriptions of the word “feminism” nowadays: is it the militant movement for the improvement and extension of women’s rights in society or simply an aggressive feminism hated by public opinion? Should we see extremist feminism or simply a fight against inequalities that everyone should defend?

Radical feminism considers that there is a specific oppression of women for the benefit of men, and aims to abolish it, while denouncing the establishment of the social role of women.

To simplify these definitions, we have on one side, a doctrine that tries to cure a profound evil of our contemporary society, via a message of peace, on the other side, we have a doctrine that has been mission to heal evil with evil, with the belief of violent protests.

On a personal level, I really hear the daily struggle of feminists: equal pay, equal opportunities, the reassessment of the place of women in society, and a better distribution of tasks in the workplaces and homes.

You will understand, I have absolutely no problem with feminism. On the contrary.

On the other hand, I am really against the radical feminism, which poses a real problem for me. This is only my commitment, but I am deeply convinced that this movement is harmful to its original doctrine: feminism, a democratic movement.

Using our hysteria and nudity to attract cameras and photographers will not help to carry a credible and understandable political message. Extremist feminists are unfortunately more seen than heard and they contribute to fueling the image of the hyper-sexualized woman object and through that they harm the feminist cause where specially in our modern society, the multiplication of images  will inevitably lead to ruin the actions of these feminists.

As a feminist, I think that feminism is based on tolerance and respect, and therefore equality between men and women. If the feminist struggle is a long-term struggle that must constantly be conducted because it aims to a cultural change, in no case it can be associated with this type of provocative and movement. 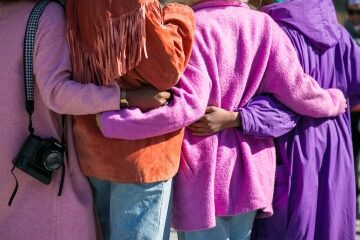 In the past, child protection’s main approach considered both the children and their families as just a vulnerable group in...

What would you say to your great-great-grandchildren?

What would you say to your great-great-grandchildren if you were sure they would receive your message? Do not be afraid...