Almost ten years ago I came to the U.S. for the first time as an exchange student. I was just 15, it was my first time abroad and I was placed in an American host family in the middle of nowhere. To get to the small town of Healdton in the state of Oklahoma it took me two flights from DC, one of which was practically on a puddle jumper, and then we drove for a few hours across the emptiness of the state where Native Indian culture still exists.

“Howdy y’all?” – my host mother greeted, pacing down the stairs from their trailer house. (You got to learn the local accent and phrases.) She was genuinely friendly. I liked her right away. Now, living in San Francisco I can tell that Oklahomans are genuinely friendly and open even though they still ask “How are you?” without actually meaning it. (I wonder how many cultures get frustrated with this American habit?) 🙂

I spent a year in the state where people watch tornados from the porch of their houses drinking Dr.Pepper or Root Beer. And I loved it regardless of all the things people hate about the Midwest. And regardless tornado siren every Friday at noon.

Stereotypes of an uneducated overweight red American were probably born in the Midwestern state. But on the other hand, Midwesterners have a lot of coziness with their cowboy habits.

Here are some of the stereotypical things I’ve experienced in Oklahoma:

Anything Can Be Deep Fried
OMG yes! Prepare yourself for local fairs. Or actually for any meal at anyone’s house. You will be surprised but they deep fry everything: from sticks of butter to Coca-Cola. And a deep-fried vegetable would be considered as a healthy snack. No surprise Midwestern states lead by the number of overweight people and diabetes.

Know the lyrics of Boomer Sooner cheers
Oklahoma is not as empty as people say (assumption people make by crossing the panhandle of the state with 1% of its population) but there is not that much to do. So football is the second religion and you should get baptized with the sweat of players. And learn the cheers for your now-favourite team:

(can’t help it but rap it haha)

Four seasons in one day
I would scrape ice off the car to open the door in the morning but by noon air would be too hot to breathe in. Welcome to Oklahoma. Wait till you hear the siren about the upcoming tornado (over 50 each year!). And see your friend hopping into the truck to chase it! Haha

Country music, baby
Wear your cowboy hat and boots and forget about Nashville. Oklahoma is the land of country music lovers. I mean.. Toby Keith’s music videos are the quintessence of Oklahoma. I still can not take it seriously though. Sorry, Oklahoma.

Oklahoma = family
There is a strong sense of family and you are everyone’s friend. You can argue this being true due to the high number of very religious people. (Seriously, you will see churches everywhere. Sometimes I would question myself if there are enough people to go to all of them.) Or due to the slower life over here compared to the coasts therefor what else to care about. (People here often get married right after the school). But you can not argue with how nice it is to feel like you are welcomed.

I can talk for hours and days about Oklahoma, about the good and bad times but a year in the town that you would see in the movie about a serial killer taught me how to love my American AND Russian family. Also, how to drive a four-wheeler and laugh at fart jokes (not sure if that’s a good one). Cheers! 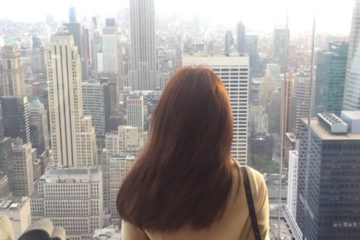 Yesterday, I turned 30 in New York City. It was a joke I had made to my father a couple...