Life as a New Yorker

A city so fast-paced, you ride it or it rides you. Every New Yorker walks so fast it’s like they are seeking the next available restroom.  Isn’t it weird that a city so diverse and very welcoming of different groups of people isn’t very welcoming of an individual but the southside of America like Alabama, Georgia, etc is very welcoming of the individual but not welcoming of the group? The New York lifestyle is intense and engaging, one cannot take a deep breath to wallow in the beauty of the city. I guess that why most people who live in New York do not know much about the city, most tend to travel out once they get the chance. The standard of living is super expensive, you have to sell a kidney and an eye to eat at a moderately fancy restaurant, attend a Broadway show, shop on Fifth Avenue, take a Chelsea Pier cruise on the Hudson river, get an apartment you don’t have to share with no one.

It is crucial to notice something significant, and I wish everyone who lives or is visiting the city should observe the classism in New York. As you take the train from Uptown to Downtown, you notice the change in the race, from the Bronx, you see mostly Latin Americans then you see a switch to African Americans coming from Harlem and then White people from Manhattan and then a little mix when you get to Brooklyn and Queens. I can not say anything about about Staten Island, because no one goes to Staten Island.

New York is so individualistic, even having Happy Hour is forced on workers to create team bonding. If you so much as say good morning to a stranger on the subway, you get a cold stare that is so face-melting you wish you never said a word. If a stranger says hi to you, he/she is definitely not from New York or that’s just a serial killer, so run!. What blows my mind is that every New Yorker knows about their individualistic nature but everyone is too supercilious to care, they rather amass the depression that is resulted from being alone.

As a Nigerian, adapting in New York has not been a slamdunk I must say, I had to change my style of dressing into a retro or bohemian style of dressing to seem more accommodating, I had to change my accent to the New York accent to improve communication, and most importantly, I had to realize that as long as I live in America, I will be seen as a Black Man so I must enlighten myself of the struggles of a black man so as not to get in trouble. 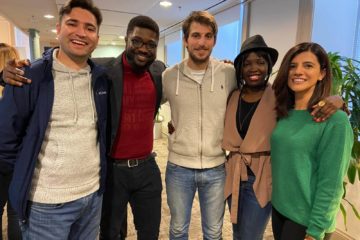 What to do after Global Leadership Lab? I got you!

GLL came and went with a bang, as always. Satellite fellows went back to their duty posts. As always, GLL...

No Housing, No Problem

Travelers from overseas like myself expect flavorful journeys, captive adventures, memorable experiences and an abundance of knowledge and learning. I...

When no is better than yes?

How not to give up when your dream job is taken by someone — but not by you  Application, CV,...