In loving memory of Sarge

Grief is a spiral blade, cutting and twisting moments loosely sauntering through memories of joy, pain, laughter, and hope.

I will never understand how some people are good with words, they say the right things to a grieving soul and the world melts before the sad one. Grief has taught me the beautiful and daunting effect of silence; this is how I heal and then, there is also poetry.

A beautiful soul called Rhys took me into her home in Boston Massachusetts on a day I thought I will be homeless in the ‘great America.’ She is what I would call an angel, a testimonial that came from a few other people who knew her well enough.

Two days after I moved into her home in a shared living apartment, Ms. Rhys lost her cat Sarge to an unknown cause. I felt like a pack of bad luck, and the universe should have known better than leaving me all alone in the kitchen with a traumatized woman whose sadness over her lost cat was becoming more and more infectious than I would have expected. She was crying and kept looking at the window hoping Sarge would miraculously appear from the blues but he didn’t, he was gone, the same cat she had loved and cared for for 12 years. I didn’t know what to say to her, nothing seemed right. So, I just listened in silence and experienced her pain because I remembered how it hurt when I lost my beautiful dog, Bella.

Like many other human conditions, grief is a connecting phenomenon revealing the collectiveness of our consciousness as humans and how we share in a myriad of experiences without even acknowledging or realizing. For many, Sarge was just a cat, and for many of my friends back at home, it would be just one death of a cat that might have been an evil spirit or a transfigured witch that got smitten by the Holy Ghost fire from God. Yet to Rhys, Sarge was her baby and I completely understood.

I saw Sarge only twice, the first time was through the windowpane of the kitchen when Rhys introduced me to him after showing me to my new room. The second time was the day before he died. I remember seeing him by the window, staring at me as one seeking answers to the question of who the hell I was and why I was looking at him in the first place. I ignored him but went on to think about how really calm and present he was. This poise of his, I envy when I see it in many animals.

After the cat’s death, as clueless as I was as to what to do to ease the grieving Rhys, I decided to present the one thing I don’t struggle to do as such: poetry.

So, casually, I wrote a poem for Sarge. And like most of my poems, this poem had no title but, I believed it would comfort Rhys in some way and it did! 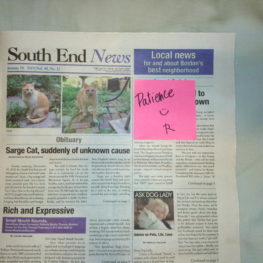 I woke up on the 12th of January, had a shower, took the stairs down to the kitchen and found the South End Boston newspaper lying on the dining table with a sticky note that had my name on it, it was from Rhys. I quickly took a sneak peek and it read, ‘‘Obituary, Sarge Cat dies suddenly of unknown cause.’’ Rhys had published an article on the newspaper about Sarge. Also, she attached my poem for Sarge on the same article and it read; ‘This poem was written for Sarge by a new South End resident, Patience Andrew, a poet from Nigeria working at Teen Empowerment this year as an Atlas Corps Fellow.’’ 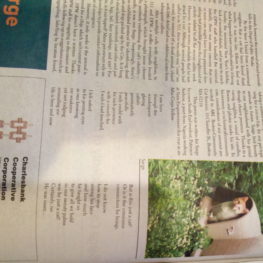 I was so elated to see that my poem had made the papers in the ‘great America’, but more than this, it taught me how sympathy is the invincible and voiceless angel waiting for humanity to embrace her call, and grief, a journey no one should travel alone.

I hope Sarge teaches you something in this simple poem:

I only could wish

with a comely fur

I wish I had touched.

to his peering eyes

life is here and now.

But is this just a cat?

or is it the conscious

I do not know

how to stop seeing his face

to give all we hold

in our sweaty palms

was he just a cat?

Before arriving in DC, I set up three goals for myself; Educate, Experience and Explore. Educate international friends and family about my... 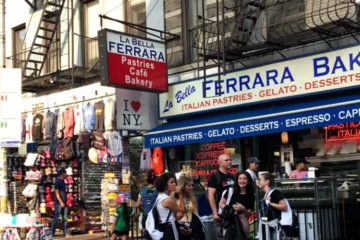 Teach, so you can learn

It is amazing how being in a different culture helps us better understand who we are and culture of our...

September 2016 – A male colleague came up to me and complained how Khaadi (a predominantly women’s clothing brand) did...