Last month I was privileged and humbled to be among five young leaders selected to give Ignite Talks on issues close to our hearts during the 2019 Global Pathfinder Summit in Virginia, USA. I represented Kenya and Atlas Corps. The summit convened participants drawn globally from more than 51 countries, to reflect upon the challenges of civic engagement, leadership, and governance in both established 21st-century democracies and states aspiring to democracy.

My talk was on how communication can be used to alleviate gender-based violence among vulnerable populations. I decided to give this talk the title breaking the silence because it’s a global scourge suffered in silence by many people especially women. I provide here a high-end summary of my talk. In this summary and during the talk I argued that this is a menace to all, with far-reaching consequences, whose mitigation would require concerted participatory efforts using communication.

Gender based violence, now replete with almost insurmountable secrecy, is an issue whose free discussion most people tread, opting instead to whisper about it in subdued tones as if it’s a distant scourge, thereby encouraging an uncanny silence around it. It is a practice deeply rooted in gender inequality and one of the most notable global human rights violations. It knows no social, economic or national boundaries. It can be perpetrated by an intimate partner, a family member, a neighbor, an acquaintance or a stranger. According to the UN Women, one in three women experience physical or sexual abuse in their lifetime. That’s serious! Indeed, we need to act now to reach out to everyone to provide recourse for more than a half the earth’s population. The elimination of this vice is now increasingly recognized as a priority for the international community.

Most research findings indicate that there is a greater awareness regarding violence against women but behaviors have changed little. ‘What needs to be done?’ is partially the objective of this talk.

It’s not intended to provide a one-fit-all wherewithal for dealing with this adversity. But to trigger an awakening sensitivity to variously find recourse for the victims by an all-encompassing participatory approach for the benefit of society. Behavior change communication is one of the key tools that, if well utilized, can be useful in alleviating gender-based violence. Do you think behavior change communication has enough bandwidth of inducing societal change of norms and values that encourage this practice?

I believe it does. Take for instance employing advocacy strategies that engage men and boys as advocates and ambassadors for agitating for respect and protection of women. Engaging them in changing the existing communities’ attitudes and beliefs around gender norms, patriarchy and masculinity. Some GBV organizations have used this strategy and there is some notable behavior impacts. For example, the Coexist Initiative in Kenya which works directly with men to end violence against women and girls. UN Women Brazil’s “Brave is not Violent” campaign partnered with soccer teams to engage men and boys and stimulate a change in attitudes and belief. There are also successful campaigns like the UN’s HeForShe movement  “Orange the World: #HearMeToo,” that includes men and boys to become agents of change for the achievement of gender equality.

Advocating for legal frameworks and using dialogue as a tool for changing social and cultural attitudes to remove barriers to women’s participation in wider society. Raising awareness, disseminating information on gender-sensitive human rights methodologies, media and communications campaigns like the Me too movement, and extensive efforts directed towards building non-violent, gender-sensitive curricula in high school and other tertiary educational institutions.

Using affirmative administrative communication involving the county administration, the court system and the community. The court system could hand down GBV perpetrators judgements that reform rather than incarcerate them. Behavior change communication initiatives like civic education can also be channeled through mass media outlets. Working with the national media to sensitize journalists (and the public), to the causes and consequences of GBV to improve reporting.

Entertainment communication through sessions of storytelling, traditional music, dances, local performances in remote villages on GBV issues has also led to some behavior change. An example is a Men’s Story Project that is using storytelling and community dialogue to explore social ideas about masculinity. 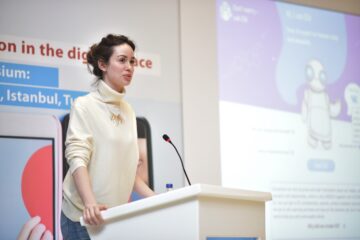 Join us as we speak with Atlas Corps Scholar Maria (Cohort 4, Russia) from our Russian & American Women’s Leadership Initiative. Maria is the Programme Associate at the UNESCO Institute for Information Technologies in Education, where she promotes youth autonomy in Eastern Europe and Central Asia.

One soft skill to master in the American work environment

Forgive me for generalization, but Eastern Europeans are very direct in their communications. We don’t really think about whether we...

Aftershocks that impacted my professional life

On April 16, 2016, Ecuador suffered an earthquake that destroyed buildings, affected hundreds of families and marked our memory forever....