2018 marked itself as a year of international travel for me! When the world was making plans to visit NYC over the New Year, we decided to visit Mexico city and explore firsthand the beauty that we have so heard of. Tips: travel light because there is sooo much to shop in that beautiful city! And oh, it turns out Egypt is not the only country with those amazing ancient pyramids!

Mexico City was founded on what was once the ancient Tenochtitlán after the Aztecs are said to have witnessed an eagle perched atop a nopal while devouring a snake. You’re unlikely to see anything quite like this in Mexico’s capital nowadays, but you will see a huge range of stunning attractions that hark back to the city’s origins and rich history.

I will only mention a ‘FEW’ locations since there is just so much to see in the country and little space here 🙂 Behold!!

Can you imagine walking in the exact same place where the famous painter, Frida Kahlo, was born, where she lived and died? You will find this little abode, which is now the Frida Kahlo Museum ‘Casa Azul’, in Coyoacán, her favorite neighborhood. Not only does it safeguard her most cherished works of art such as Viva la Vida and Frida y su cesárea, but it also is home to her diaries, clothes and even the artist’s bed. If you look closely, you will find her ashes in what was her bedroom, gloomy right?

The Templo Mayor is home to the precious aspects of history and visiting this museum site, you stop in front of what was the great Tenochtitlan’s important temple. Among the 7000 remains that were found there in the late 70s, we discovered the largest Mexican sculpture that has ever been found: the polychrome relief of the goddess of the Earth, Tlaltecuhtli. You will also stumble upon a large circular monolith that represents the Moon goddess, Coyolxauhqui.

Xochimilco was named a UNESCO World Heritage Site in 1987 and its neighborhoods are full of tradition and respect for nature. It’s one of the most important tourist destinations in Mexico City, in which you float through canals in traditional trajinera boats. During the tour, you will come across boats with mariachis players, ‘ranchero’ trios and marimbas who will offer to play you a few songs and liven up your evening. Ask to visit the Island of Dolls, an eerie plot of land where dolls are hung from the trees. Its creation is attributed to Julián Santana Barrera, who is said to have used the dolls to scare away the spirit of a girl who drowned near the area.

Celebrate the dead in the Megaofrenda of the Main Square

Day of the Dead is one of the most important traditions in Mexico. On the 1st and 2nd April, they wait for the deceased and prepare offerings with ‘pan de muerto’, traditional food, corpse figures, marigold flowers, candles and tissue paper with elaborate cut out designs. One of the most iconic celebrations is the Megaofrenda in the Zócalo (Main Square), every year it has a different theme. In 2017, it was dedicated to the rescuers and those affected by the earthquake which Mexico City experienced on 19th September 2017. Which is why we saw a lot of colored skulls used in decorating different city locations. 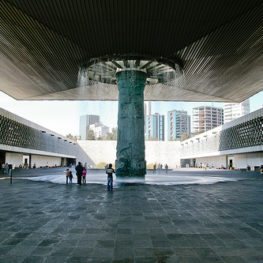 The architecture will impress you. It’s impossible to see the entire museum in one day, but seeing the Coatlicue will change your perception of one of Mexico’s most important museums. After 54 years, it was necessary to restore its two great murals: The World of the Maya (Leonora Carrington) and the Map of Meso-America (Ernesto Vázquez y Luis Covarrubias).

Its official name is Monumento a la Independencia. It’s a meeting point and a starting point. While those who step foot here may not know it, they are standing on the remains of those who made this country. Before becoming the headquarters for important social protests and rallies, the monument was a mausoleum formed by a slanted zócalo, a quarry-stone column standing 35 meters high, and the statue of the Winged Victory of Samothrace at the top – designed by architect Antonio Rivas Mercado.

The flat, treeless Zócalo is one of Mexico City’s most iconic places. A multifaceted destination, it’s never short on activities such as concerts, plays, book and science festivals, job fairs and a lot more. La Plaza de la Constitución, colloquially known as “el Zócalo” for its wide-open space, was also called the Plaza de Ánimas is days of New Spain. Its current name was given in honor of the area’s prominence during the signing of the Constitution of Cádiz (1812).

The construction of Bellas Artes was completed by Italian Architect Adamo Boari. The Palace is famous not only for its architecture, but for its collection which houses 17 murals by Mexican artists which were created between 1928-1963. Standout murals include El hombre controlador del universo (1934) by Diego Rivera; La Katharsis (1934) by José Clemente Orozco; Tormento de Cuauhtémoc (1951) by David Alfaro Siquieros; among others. The Palace also is home to the Museo del Palacio de Bellas Artes and a principal room, which is an excellent place to enjoy operas, chamber music, and theater.

My one advice to everyone: Please visit Mexico when and if you can! It is totally worth it!! 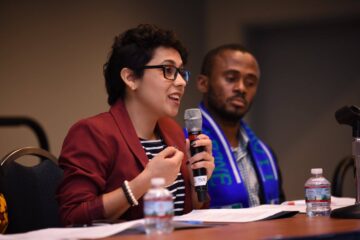 Today we talk with Fernanda, Atlas Corps Alumna from Mexico and an excellent Group Captain for the Atlas Corps Virtual Leadership Institute.

This is a story of four ‘Not-so-very-rich” Atlas Corps fellows visiting Mexico on a low budget but still having an...