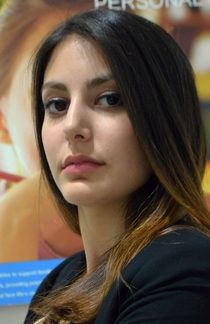 Abeer is a communications specialist from Syria with more than three years of experience in the humanitarian and nonprofit sector. She earned a bachelor’s degree from the University of Aleppo in English literature. In 2013, Abeer joined the communications team in Syria at SOS Children’s Villages, an international nonprofit focused on the comprehensive care of vulnerable children. In Aleppo, one of the areas most affected by the war, Abeer produced human-interest stories that showed the broad impact of the organization’s humanitarian relief program. Most recently, she has served as the Crisis and Communications Advisor in Casablanca, Morocco and is responsible for internal and external communication related to crisis and emergency communication in the region. Abeer has gained valuable experience in war reporting, digital storytelling, media relations, social media strategy, and corporate communications. She strongly believes in the power of good communications and storytelling in raising the money needed to support vulnerable communities.

Role at Host Organization: Abeer will will support communications for American Express’ three areas within Corporate Social Responsibility: Historic Preservation, Leadership Development, and Community Service. She will provide content for LeaderStories.org, a website funded by American Express, created to share the leadership journeys of social purpose leaders who have benefited from our program and will also work closely with the public relations team.