Can we stop violence if we treat it as a contagious disease?

We have been able to stop many diseases throughout the history, can we stop violence if we treat it as a contagious disease?
What my experience with Cure Violence Global taught me.

Punishment is one of the prevalent ideas as a deterrent to crime. Behavior Change Practitioners have regularly expressed that punishment is not a primary driver of behavior, nor it is the main driver of behavior change. However, many nations still rely on it. A study conducted in Connecticut followed 16,486 prisoners for three years to see how many of them would end up going back to jail. Results from the study “found that about 37% of offenders were rearrested for a new crime and sent to prison again within the first three years after their release. Of the 16,486 prisoners, about 56% of them were convicted of a new crime”. Another report by the U.S. Department of Justice was published in May 2016 stating that “Increasing the severity of punishment does little to deter crime”. Both violence and great infectious diseases have each killed hundreds of millions of people throughout history. Nowadays, science can understand the causes of infectious diseases, study them, and limit their spread. However, before science, these epidemics had been utterly misunderstood. In epidemics such as pledge, typhus, or leprosy, we used to treat sick people as bad people. We blamed their moral character.

Violence has characteristics of epidemics

Violence behaves like a contagious disease (epidemic). Various studies show when people are exposed to violence, whether through the community, media, family, or school, the outcome is pretreating violence (violent act, attempted violence, the threat of violence). This also sounds like if someone is exposed to others who have the flu or any infectious disease, he will probably get infected.

In epidemics, finding and detecting the first cases to interrupt transmission is the first step in dealing with infectious diseases. For example, in the case of the COVID-19 epidemic, you need to find and detect the people who tested positive and are spreading the virus. Organizations like Cure Violence Global use individuals called interrupters to halt the spread of violence in their neighborhoods and communities. They work with high-risk individuals to calm them and reduce tensions.

Mapping, detecting, and managing the people who might be infected, whether with infectious diseases or with exposure to violence, aiming to change their behavior in the latter case.

Changing the behavior and the norms in the community through a bunch of activities such as public education and working toward changing the norms.

Violence can be treated

Having this scientific understanding and approach has significant advantages. We now know what causes violence, and we can proactively avoid exposure to it. This is good news. There are many implications for how to better treat violence in all its forms. Applying science-based strategies will allow us to finally eliminate the violence disease as we did with many other epidemics in the past. 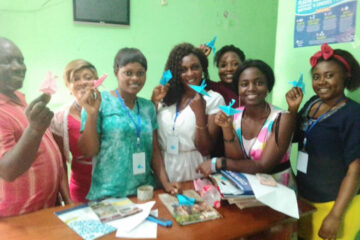 Scholar improves public health and protects the environment in Cameroon

Mbivnjo works for the Association for Community Awareness (ASCOA), a nonprofit organization protecting the environment and improving people's lives in Cameroon.